This blog contains experience gained over the years of implementing (and de-implementing) large scale IT applications/software.

There is a small bug in the ABAP code when registering a SAP system to be monitored in a central system (e.g. Solution Manager) in transaction RZ21.
This was found on a Solution Manager 7.1 system.

The scenario is:
You try and register a remote monitor entry in RZ21, you enter the message server details of the system, the password for the CSMREG and the <sid>adm user, then click Save.  The screen gets to the “generating logical ports…” section but you notice that it mentions a non-existent instance number for the system it’s generating the ports for e.g. instance 00, instead of 01.
At the end of the process, you get an error about invalid XML or an XML error in the error message panel.

The reason:
If the SAP system to be monitored, has an instance which is using a HTTP port that is less than 3 digits (e.g. port 80), then the ABAP code in the Solution Manager, incorrectly determines the instance number of the instance to be “00”.

To get around the issue, the ABAP debugger had to be used to manually adjust the instance number prior to it being saved.

Create a breakpoint in the code as follows.
Use SE38 to display the source of include LSALWS_CONFIGF01: 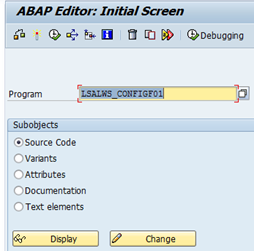 Then, before you click “Save” in RZ21 after entering the message server details and passwords, type “/h” into the command bar:

Then click Save in RZ21.
Once the breakpoint line is reached, the debugger will be launched and displayed.
Change the value for the variable “ws_instance_list-inst” from “00” to the correct instance values (in our case it was “01”), then continue the execution from the debugger: and the entries will be created correctly.

For systems with multiple instances, you need to change both instances during the loop so ensure that you do not remove the session breakpoint until the save process is completed.

If you have tried to register the system in RZ21 before, and it failed, there may be an invalid entry now present in the Topology view in RZ21.
Simply delete the invalid segment from RZ21.