This blog contains experience gained over the years of implementing (and de-implementing) large scale IT applications/software.

A few months back I had a Korn shell script which used OpenSSL to encrypt some text using AES 256 CBC.
I managed, through the power of stackoverflow.com and various other blogs, to write a Java routine to perform the exact same encrypt/decrypt.
This allowed me to encrypt in Korn on Linux and decrypt in Java which was running inside a SAP Netweaver application server, or the other way around (encrypt in Java and decrypt in Korn using OpenSSL).

I forked the PowerShell code which did the initial encryption and wrote the decryption routine which I’ve published as a Github gist here:

You would like to know what is a good value for buffer pool max size and how do you know we have enough memory assigned to the Rep Agent?

We can calculate the amount of memory needed for the Rep Agent like so:
max 200 packages x 1.5MB = 300MB of Rep Agent memory.

Now we know how to work forwards in the calculation, we can work backwards, starting with the Rep Agent memory:
300MB of Rep Agent memory / 1.5MB = 200 packages (buffer pool max size).

In an Azure SLES 12 Linux VM the default installation image mounts the /tmp file system as a regular file system off the root (/). Historically, for many Unix/Linux environments, this is not “normal”.

In this post I will discuss what the impact is for this irregular setup of /tmp and what you can do to work around it, ensuring SAP continues to work as usual.

In traditional Linux installations the /tmp file system is usually mounted as a temporary file system (tmpfs), which means it would be cleaned on O/S reboot.
This has been the case for many years. There’s a recent post here that highlights 1994 for Solaris.
Plus, you can find a detailed explanation of tmpfs here: https://www.kernel.org/doc/html/latest/filesystems/tmpfs.html

With the default SLES setup, any files placed into /tmp will not be automatically be cleaned up on reboot and as per the previous links, there can be performance reasons to use a tmpfs.

From memory, there are differing standards on what /tmp should be used for (again see here), and it is possible that the traditional setup is no longer following a newly agreed standard. I really am not certain why SLES does not mount /tmp as tmpfs.
All I know from over 20 years of working with different Unix/Linux products, is that it is generally accepted that /tmp is a dumping ground, that gets cleaned on reboot and from what I can see, SAP think the same.

What is the Impact of /tmp Not Being tmpfs?

When you have /tmp and it is not cleaned on reboot and is not a tmpfs, then it can cause issues when using software that expects some form of clean up to be performed.
When I look at some of the SAP systems in Azure on SLES 12, I see a build up of files in the /tmp directory, which results in the need for a scripted job to clean them up on a periodic cycle.

If some of the more prolific files are not cleaned up regularly, then they can build up into many thousands of files. While this shouldn’t impact the day-to-day running of the SAP system, it can impact some ad-hoc operations such as patching the SAP system or the database.
The reason is that sometimes the patching tools write out files to the /tmp area, then crudely perform a “ls” to list files or find files in that location. If there are many thousands of files, then those listing operations can fail or be delayed.
A perfect example if the patching of the SAP ASE database, which can be affected by thousands of files in the /tmp location.

Finally, with the /tmp directory mounted off the root disk, any filling of /tmp will fill your root disk and this will bring your VM to a halt pretty quickly! Be careful!

What Sort of Files Exists in /tmp ?

In the list below, I am looking specifically at SAP related files and some files that are culprits for building up in the /tmp directory.

How Can We Clean Up these Files?

The most common way is to use a script.
Within the script will be a “find” statement, which finds the specific files and removes each one.
It needs to be done this way, because if there are too many files, then trying to do “rm /tmp/tmp*” will exceed the number of lines in the shell space for globbing and it will either error or produce no output at all and no files will be removed.

The script will need to be executed as root frequently (maybe weekly or even daily) to ensure that the file quantities are kept consistently low. This can be achieved using an enterprise scheduler or a crontab on each server.

Here’s an example of how to clean up the /tmp/tmp* files with a very specific criteria. The files are removed if they are:

In summary, you should check how /tmp is setup in your VMs, and then check the files that are created in /tmp.

Since December 2013, my blog readership has really taken off.
It’s nearly at 7,000 page views per month:

Which is the most popular post of all time, well it’s still my multi-post guide to basic performance tuning a SAP system (published in 2011), but very closely followed by my recent HANA installation into a VM post.
You will also notice that a lot of readers are looking for the FICO authorisation objects F_REGU_BUK and F_REGU_KOA: 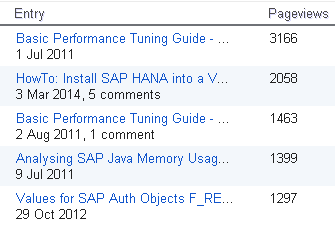 We can see that the US is very dominant in the stats, secondly India and then Germany.  The UK is in 4th place: 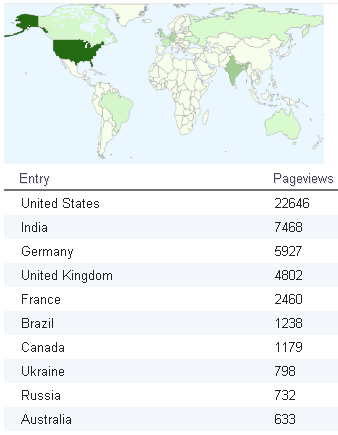 It’s a close call between IE and Chrome in the browsers used.
Good job I’ve written my free extension for searching SAP notes, in Chrome!

Thanks for reading everyone.
I hope I’ve provided you with the solutions you’ve sought.

Whilst in Puglia in the south of Italy, I’ve come across the locally named Fuci Fuci insect (in dialeto) which is Puliese dialect for “run run”.
A quick search of the internet doesn’t tell you what this insect is actually called, based on the dialect name, not surprising.
It’s a member of the centipede family and is known as the House Centipede.  It is documented here:
https://en.m.wikipedia.org/wiki/Scutigera_coleoptrata
It’s harmless and is probably on the hunt for spiders!
Still, it creeps me out that something can run 0.5 meters in 1 second!